A self-drive safari in Kruger National Park turned out to be a more liberating and enjoyable experience than any organized safari. 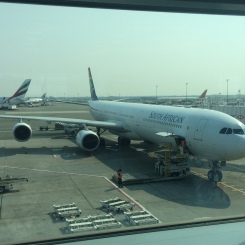 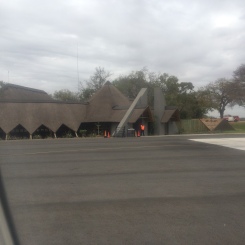 Sometimes my annoying questions on Tripadvisor get little in the way of worthwhile responses. I regarded a visit to Kruger National Park as must-see on a trip to South Africa, but I wasn’t sure how to go about it. During my first safari in Kenya, everything was neatly organized for us. Don’t get me wrong: I had a great time and saw some wonderful wildlife, but sitting on the safari vehicles for hours at a time became tedious, and organized safaris are generally expensive. With my independent streak, I wasn’t keen on being on a scheduled multi-day itinerary. The overwhelming response from forum-goers was: do it yourself!

1) I have never driven on the left side of the road
2) I would be by myself
3) Did I mention by myself driving through a large nature reserve?

The thought of charting my own course excited me, and the “what if” scenarios gave me a certain degree of anxiety.

Arriving in the Rainbow Nation

Transiting at OR Tambo Airport in Johannesburg was easy enough, with the only real delay being that most of the flights I had through JNB used a shuttle bus to/from the airport (I guess they must be in short supply of jetbridges).

The flight from JNB-SKU was incredibly short, and we were served a small snack and coffee. As I watched the Kruger bush from above, my anxiety was mostly replaced by excitement about finally making it to South Africa, a long-time dream.

Skukuza airport is a tiny thatched-roof airport and we walked straight from the plane into the building. I purchased a map of the park from the gift shop and headed into the Avis office – I was the only one, as it seemed everyone else was being picked up, most likely to be taken to their luxury safari digs. Picking up the rental car was as painfully slow as it almost always is. I was quite amused that the Avis agent offered to rent me a GPS – when I asked whether it would even work in the park, he grinned at me with a polite “No, not really”. So much for that.I did want to visit Swaziland, so the agent gave me a special paper giving me permission to drive the car over the border into Swaziland, no extra charge or anything. 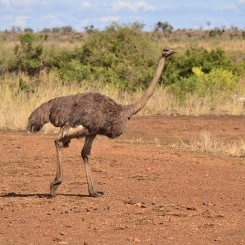 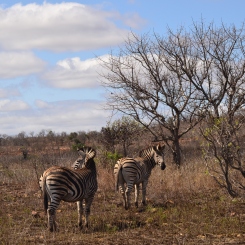 The drive over to the Skukuza camp was a quick 10-minute ride and made me a little more comfortable with how a self-drive safari would work:
1) The roads were fairly empty
2) Driving on the left side of the road is not that much different than driving on the right, except that I kept hitting the windshield wiper instead of the turn signal
3) At every intersection, signs point you in the right direction and there are only so many ways you can actually go inside the park
4) The animals own this park and will cross when they please, so watch out!

Approaching Skukuza rest camp, I started to encounter impala and elephants and noted how different this was from my Kenya experience, where encountering wildlife was relatively infrequent – even common animals such as impala and elephants. It was a good omen that I would get plenty of wildlife-watching opportunities during the trip. 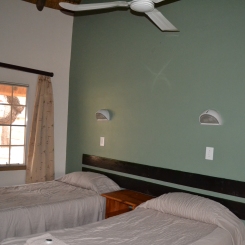 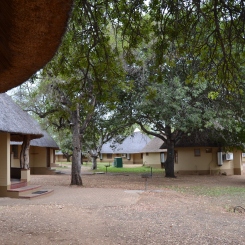 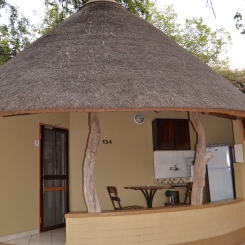 Skukuza is the big rest camp of Kruger National Park, and I read plenty of criticism from South Aricans about how busy it gets. There is a lot of accomodation, two full service restaurants (one was closed at the time), a quick service restaurant and fairly large shop on premises. It was an easy adjustment to Kruger, but I could see why people, especially South Africans who bring their own equipment, would opt for smaller camps.

The bungalow? It was alright. One could deem it just a place to sleep. The plumbing odor was a bit nauseating and lighting made it pretty hard to see anything at night. A bit over-priced but for staying in the middle of the park, its the price you pay. 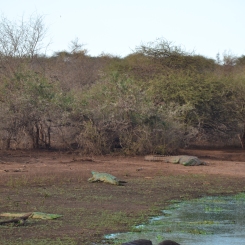 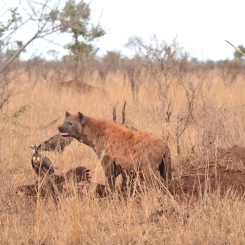 I registered myself with the camp and as it was still morning, I was told to come back later to check-in, so off I went to do my own game drive. One thing I must say: As a solo traveler, the downside is that while trying to keep your eyes on the road, you miss wildlife in the distance that your passenger(s) would normally find.

A few months before this trip, I spent a week at Yellowstone National Park, and the difference between that and this experience was night and day. When wildlife is spotted in Yellowstone, people would actually park their cars on the road and leave them to go see the wildlife. I saw people yelling at the wildlife to turn around for their photos (seriously). At Kruger, I found a much higher level of courtesy. Even with a prized sighting like lions, people properly pulled off to the side of the road to let others pass and be able to observe the wildlife. In general, my average drive would see no more than 1 or 2 cars visible. Folks will pull up next to you to ask what you are seeing, and I learned to do the same. It was overall a very respectful that at least I encountered in the park. 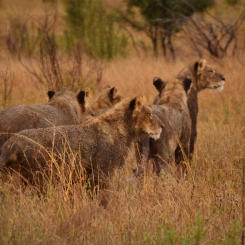 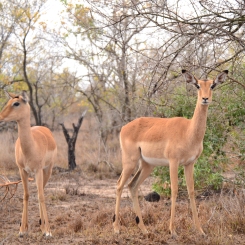 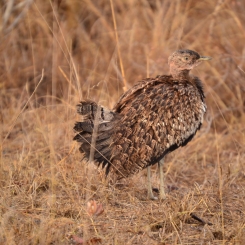 It is amazing to drive the same road 3 or 4 times and encounter completely different sets of wildlife. I had as many elephants, zebras, giraffes, wildebeest, and impala as I really wanted. I have to credit the SANP web site for listing the type of wildlife and environment of the different sections of the park and different roads. 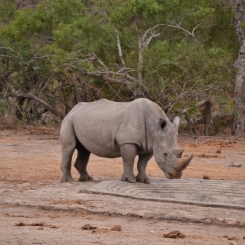 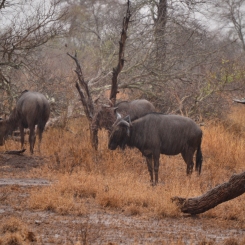 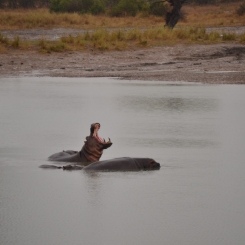 I dined in the open full-service restaurant at Skukuza the first night (Cattle Baron) – talk about AWKWARD. The place was full and was some sort of evidence that this is not a common trip for the solo traveler – add to that the waitstaff all hanging around where I was sitting. Eeek. I have to praise SANP for the quality of dining in the park – there were quick service options at every rest camp I stopped at and the food was actually good. I gained an appreciation for Mugg & Bean and the other options at the rest camps. Back at Skukuza, I patronized the take-away portion of Cattle Baron and dined al fresco at one of the tables looking out at the river – all of these camps seem to have found a beautiful view for their dining. Needless to say, faster and less awkward than sitting in one of the dining room, especially after spending 12 hours on the road. 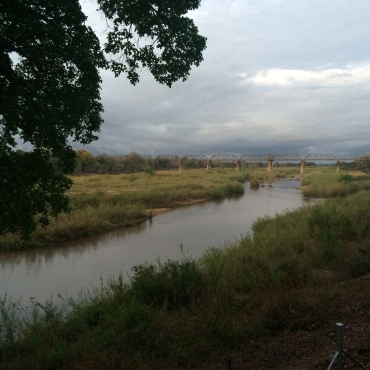 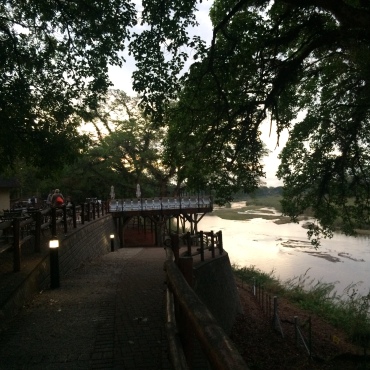 My strategy for the next couple of days:

Safety and Coping
I read about the unfortunate incident of the woman who was in the Lion Park and had her window down and well…you know the rest. SANP makes it clear that drivers should keep their windows up and stay I side the vehicle. There are a few spots where I was able to park and take a little stroll – generally these were at higher elevations where it was safer, but otherwise I only left my car in proper rest camps or stops. When watching the wildlife, I kept a reasonably safe distance (this is what long range lenses are intended for!) and if I did happen to open my window for whatever photo op, I made it quick and scanned my surroundings as this is what the unfortunate woman failed to do. When I encountered a pack of lions, I kept the windows up until they were somewhat in the distance, whereas maybe I gave myself more leeway with a sole ostrich on an empty, low-bush road.
Admittedly, one risk is that there is no cell reception outside of the camps and stops, so if you do get into an emergency, it may require waiting to flag down another car. This is part of the risk in my opinion. Traveling alone usually means a lot of added risk, but I believe you simple have to accept it and try to have a reasonable plan for what happens if some common things happen – crime is not really a factor here, but being in an area with few services makes this more risky than traveling to a big town or city.
The upside to having your own car is you can bring whatever supplies you think you might need with you for the days journey. I typically did not return back to my camp until sunset.

I am glad I listened to forum-goers and opted it to do it myself. My only regrets were that the elusive leopard and cheetah were not spotted on this trip, but I encountered both in Masai Mara, so it wasn’t the end of the world for me. I found Kruger National Park to be pleasant and my co-visitors to be equally pleasant. I can’t compare this at all to Masai Mara, where 500 safari vehicles show up when lions of a cheetah is spotted. This just felt less chaotic, with people respecting each other’s ability to both see the wildlife as well as allowing other drivers to move past.

The dining options and shops made it easy to come to the park with almost no supplies, although understandably things are more expensive due to the captive audience – but by American standards, still quite inexpensive. There is no cell signal outside of the rest camps, but with a map and signs, it seems pretty impossible to get lost.

I think the best part of the experience is the independent travel aspect. Sure, a luxury safari outfit could have charged me $700 a day to go off-roading and probably ensure leopards, cheetahs, and even a proper kill, but I was happy to use my own eyes and encounter what I could on my own – it sort of the made the day more interesting that way than if I was sitting in a safari vehicle all day.

I loved my time in Kruger National Park and I will be making a return visit sometime soon. My time there inspired me to look for other self-drive options in South Africa and Namibia. Now that I am orientated with the park, I would probably book ahead earlier and stay in a camp like Satara or Lower Sabie

The bungalow as Skukuza was ok, but I was honestly happy to see the back of it as I left through the south gate on to Marloth Park to stay at La Kruger, a boutique hotel, in order to visit Swaziland easily. That is another plus side of KNP – besides Mozambique and Swaziland, there are other areas to explore such as doing the Panorama.