If you happen to be in Quito on a Saturday, a fantastic day trip out of town is to visit the market in Otavalo. One option is to take a bus there, but doing my research on internet forums, I found a few companies that sort of do the same exact itinerary (I almost wondered if it was the same tour, but it seems like it wasn’t):

Quito Tour Bus, the same company that runs your typical red double-decker Hop-On, Hop-Off style buses, seemed to be the easiest to deal with, so that was my choice.

The pickup information was vague, so I called them up the day before and was told to simply show up at Plaza Foch, just a few minutes walk from my hotel in the Marsical. I eventually encountered a couple waiting for the same pickup (the square was otherwise empty that early in the morning) and assumed we should wait it out by the stop for the actual city tour bus. To my surprise, the transport that pulled up was not some large coach bus, but a smaller vehicle, and there were only 10 of us in the group. I can’t stand large groups, so this was perfect for me. As always, you end up befriending someone or the other on these trips, and I mostly hung out with a pair of American guy friends who I guessed to be in their 50’s, and a pair of British girl friends who I guessed to be in their 40’s.

Our only other stop in Quito was at Parque Carolina, where I paid my $60USD, and off we went!

The destination is not always the coolest part of the journey. There are some amazing engineering feats when you look at how roads were created in the mountainous area around Quito, and like many other cities in Central and South America, the outskirts of the city house poorer areas, which in Quito are still a rainbow of colors.

The slums of Quito

The first stop on our tour was the Quitsato Solar Clock – the official equator, dividing the northern and southern hemisphere. Unlike Mitad Del Mundo, which is a full-on tourist site,the Quitsato Sundial was funded as a non-profit initiative to offer up guidance of the astronomical knowledge pre-hispanic cultures in the area held, so a short lecture and diagrams were shown to give everyone a chance to enhance their understanding, such as the fact that the platform is designed to point to the equinoxes and solstices. Once this was complete, we were free to explore a bit and of course, take the obligatory one foot in the northern hemisphere, one foot in the southern hemisphere photo. That was really it for this stop. I had trouble hearing the explanation, so I simply looked it up myself en route to the next stop.

We continued driving along to Lago San Pablo. With each stop, the itinerary listed a time but not really what happens. With Lago San Pablo, we simply made a bit of a rest stop to see the valley around the lake, and try some of the Cayambe Bizcocho (biscuits) which are a little bit like a hybrid between puff pastry and tea biscuits. Interesting, but dry after a while – definitely need coffee or something to really enjoy them.

Our main stop was by the market of Otavalo. The market was a lot of fun, but I would not go  expecting to really have escaped it all. There were plenty of gringo couples roaming the market, and tourism has clearly made its mark here in what was probably once a smaller and more traditional market dealing in fruits or random goods like cheap toys and soap – if you walk around, you still see those on the sides where local people shop, but for foreigners, you have a wide variety of textile goods, and some artistic items. My one regret is that the free time in Otavalo was limited – I just had enough time to roam around and observe the goings on – people hauling chickens, some artistic pieces and some awful ones, and a lot of textile products. Possibly the most enjoyable part of the market is to visit the food stalls, with the roasted pig attracting a MAJOR crowd – I sadly  did not have enough time to wait, so I opted for some of the many snack vendors selling empanadas, roast corn, and other quick foods by the side. 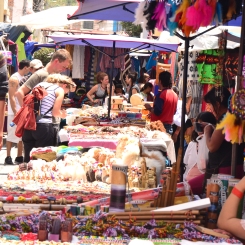 Gringos in their funny hats and apparel shopping in Otavalo

Traditional dress of the women

We took only a quick spin through Cotacachi, the town known for its leather goods, before making our way onto Peguche waterfall. Most of the stop here was to walk up to the 50-foot waterfalls known as Cascadas de Peguche, reknowned as an indigenous ceremonial purification site that is still used today. The waterfall is cute and you get a bit of nature along the walking path that leads up to it, but I made a visit to Victoria Falls in Zimbabwe some months ago, so let’s just sya I had my fill of waterfalls. While the others took it in, I made my way back to take a break during this packed itinerary.

The final stop on our itinerary was Cuicocha, a volcanic lake where we only had to wait a little bit to take a short boat ride around the lake. I excitedly climbed in to sit towards the front on the side and was soaked by the end of it! Again, it was a nice activity but there is really not much wildlife, so it is just meant to give people a chance to see the natural beauty of the volcanoes set against the lake, and even get a feel for the effect of the volcanic vents on the water. 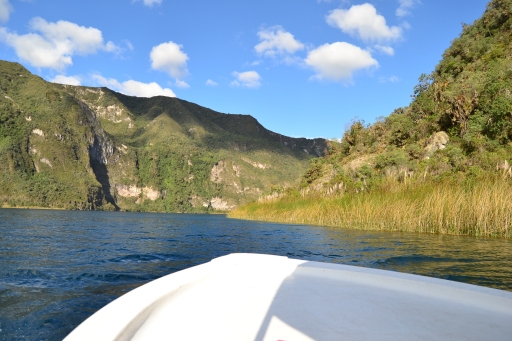 Boating on the Volcanic Lake

The amusing part of the tour were the “guests” that would come onto the vehicle to sell their goods, and then exit at another location. It became a running joke among us on who the next “guest” would be. I have to give them credit – I guess this was easier than being made to spend an hour in some overpriced gift shop, being served tea or something. The vendors invited on the bus were actually quite reasonable, with items ranging from paintings to shawls. I did not pick up anything, but others in the group actually did like some of the things the guests brought on board.
Conclusion

Taking one of the tours is an easy way to get a taste for the Andean highlights north of Quito if you are short on time. The group was both small and disciplined, so we were not waiting around for people to get back. The guide was easy-going and let people do their own thing – no nonstop lectures or trying to force you to stay with them. He just made sure we got on the boat at Cuicocha and heard the lecture at the Solar Clock.

My only disappointment is that maybe another half hour or hour in Otavalo would have been nice, but I don’t know if I would have cared to stay in the town overnight (I know some people do it to see the animal market, which I caught the tail end of). The time alloted meant either sitting down to eat or exploring the market. As I mentioned, the people hopping on the transport to sell things was more amusing than annoying, and I did not feel pressured to to buy anything.

I really enjoyed my day in the Andean Highlands, and it was enough of a preview to make me want to come back and really explore some more of the area – Mindo, Cotopaxi, Ibarra and other places which reflect the natural beauty and cultural splendour of Ecuador’s highlands.