Mountain Gorillas can be found in three countries – Rwanda, Uganda and the Democratic Republic of the Congo. Each country charges a premium permit and limits the number of visitors each day, and this January, I had the chance to be one of these lucky people.

The permit costs in Rwanda cost $750, while Uganda charges only $600 in the regular season and DR Congo only $450, but is far more challenging to reach than the other two parks. Rwandan companies quoted me, for example, $1,250 for a one-day trek where I would leave Kigali in the morning and return after the trek, or $1,450 if I opted to stay one night in a budget hotel the night before the trek. Rwanda is an expensive country in general, so that was way out of my budget. However, when I got in touch with Ugandan companies, the costs looks much more reasonable. I finally went with Basiima Robert from Engagi Safaris. He offered to transport me to and from Bwindi Impenetrable National Park and offered me two nights of accomodation and food at his Lake Bunyonyi hotel for only $850, a comparatively great deal.

I was veered towards taking Trinity Bus Line to Kabale from Kigali. Nyabugogo Bus Station in Kigali is a madhouse of activity and it is a great place to shop around for a good forex rate and the little shops all over. IT cost 8,000 RWF to go to Kabale to Kigali. When I got on the bus, I realized how narrow the seats were – as I was in the aisle seat, half my body basically hanged off the seat for the whole trip. Before we departed, a small religious sermon was given and the only part I understood were cries of hallelujah! at the end and shaking my neighbor’s hand.

The trip from Kigali to the border takes only about 1:30 if traffic in Kigali is not too bad. The landscape on the ride up is beautiful but the roads are winding in the land of a thousand hills. One person across from me began vomiting which left an interesting odor in the bus. Meanwhile, the whole trip included entertainment in the form of religious music videos. The border crossing took between an hour and 1:30. The lines to exit Rwanda were glacially slow and you have to be aggressive to keep your place. I had no idea what to do next so I just followed others across the border into Uganda, which surprisingly has a far more efficient border control. A bunch of guys tried to persuade me into exchanging money with them along the route. The ride to Kabale was just another 30-minutes odd. 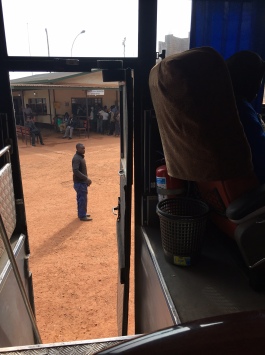 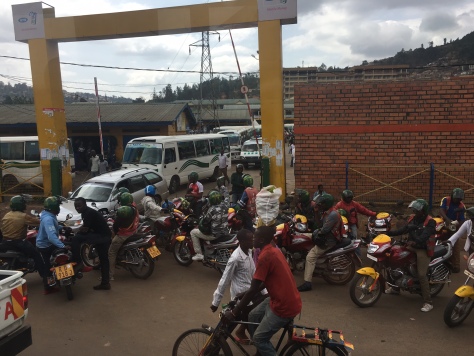 I was glad my hotel contact arranged for me to be picked up by a taxi in Kabale, as it didn’t seem like getting transport is otherwise that easy. The town is lined with plenty of stores and banks so from a convenience perspective it is great, even though it just another bustling town. My hotel on Lake Bunyonyi was in a bizarre location. We just kept driving and driving and driving. I was expecting 10-15 minutes, but it was nearly 40 minutes on dark, dirt roads before reaching the totally isolated Lake Bunyonyi Rock Resort.

I learned that despite being right across the border, Uganda is an hour ahead of Rwanda! That was one less hour of sleep before a gorilla trek – bad planning. I also left behind my jacket in Rwanda, assuming I would not need it foolishly. 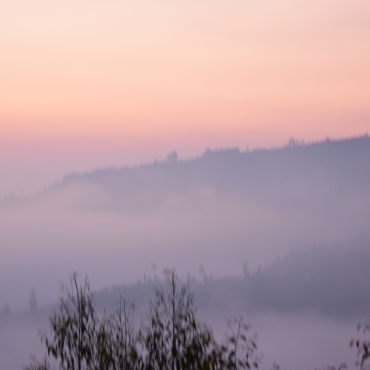 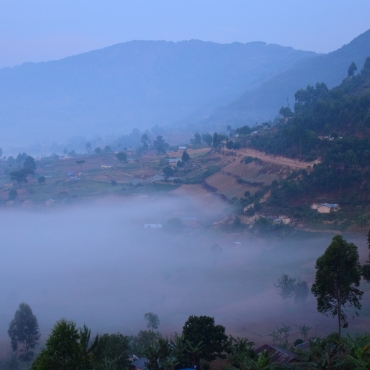 We headed out at 5:30am for the 1 1/2 hour trip up to Bwindi Impenetrable National Park. The valleys were shrouded in beautiful mist as the sun made its way up. For my trek, I was taken to Ruhija to visit the Kyaguriro group, which up until last year was just for research – in fact, a researcher was observing the group while we made our visit. 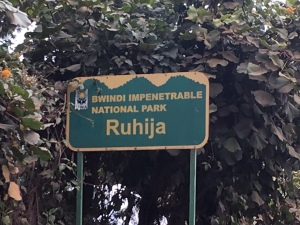 I was put in a group with 4 other people -a young woman, an experienced Spanish trekker, and a Swedish couple I assumed to be in their 50’s or 60’s. The other group at Ruhija was a group of older lady friends, one who had to be taken the famous “helicopter”. I liked my group overall – we respected each other and took the occasional break. The Spanish trekker had a bit of an attitude because she did not want anyone to take breaks on the way and shoved herself in front of everyone else when we reached the gorillas – some people just don’t understand the concept of respect. Mr. Robert was nice enough to arrange for me to rent a raincoast from one of the Bwindi staff for $5USD, although it ended up being so hot I just shoved it in my backpack. The hotel also packed a lunch for me. I would recommend:

We were lucky – it took only 1 1/2 hours for us to reach the gorillas. The trek was not bad during that time – just a lot of up and down on steep inclines. Porters can be hired for $15 and four of us opted to do that to carry our packs and that was a great relief to not getting more worn out. The porters also help their people get a push or pull, which mine tried to do a few times when I seemed hesitant on some particularly steep inclines (for me, the downhill is worse than the uphill). He made the journey that much less stressful and I made sure he was compensated generously for it. At the end, we all received our cute “Gorilla Tracking Certiticate” as proof of making this trip. I was thankful it didn’t start raining until we were out of the trail as wet conditions would have made it dreadful. And boy, did it start pouring as we made the drive out of Bwindi. A couple of the shared taxis got stuck in the road and had to be dug out along the way.

Once we reached the gorilla group, one of misconceptions was cleared up. The gorillas are not just waiting in open space to be observed. At this point, we began moving steep up the mountainside to observe the gorillas. The area was thickly covered in branches and brush on the ground, the latter which tripped me up a few times. The guides took their machetes to chop through the branches, while I used the branches for stability to make my way up. We had an hour with the gorillas, but a lot of that hour was spent following them as they made their way up. I have to admit, the gorillas were magnificent. We observed them feeding and resting, with a young male involved in a fight tending to his wounds. 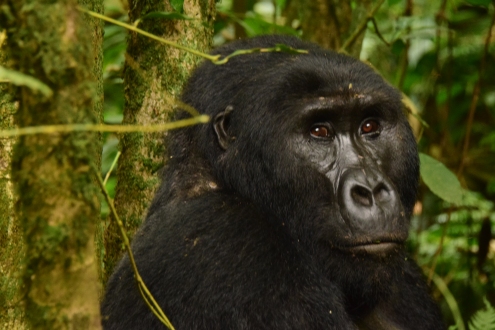 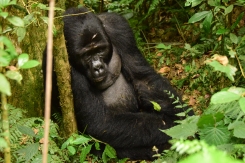 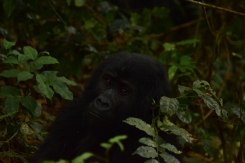 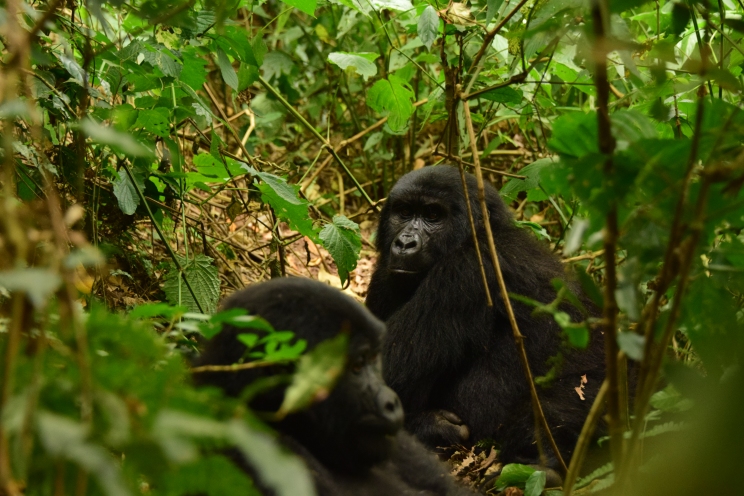 Was the gorilla trek worth it? On the one hand, the observation period is by no means relaxing. By the time you catch your breath and get to observe one of the gorillas for a minute, they will most likely go on the move again – or maybe not. The mountain gorillas are magnificent creatures and seeing them in their natural element – not behind a glass cage – that was incredible. Only a small group of people ever gets to visit these gorillas, so doing it is also a very special experience shared by some of us. 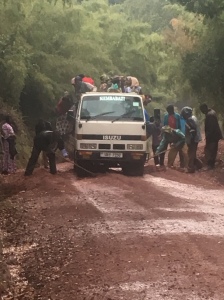 I am sad that I did not spend more time in Uganda. The landscape between Bwindi and Lake Bunyonyi was beautiful, lush and idyllic with people returning from Sunday church and busy with their daily errands. I even had the chance to meet Mr. Robert’s mother and village members who were beautifully dressed and on their way out from church. That was the casual, fun aspect of the trip. We stopped in Kabale where I joined him to pick up some food supplies at the local market to take back to the hotel.

The ride back to Lake Bunyonyi was stunning, but made me realize in daylight just how isolated the hotel was. I was exhausted from the trek but took some time to take a walk around the lake on its dirt paths. The only thing you can hear is the sound of goats. The only thing you see are banana trees, some incredible birds and local children who were bemused by seeing me wander around. I was a little annoyed by how isolated the place was, but on the other hand, a part of me appreciated the peace and serenity of the place. Would I stay there longer? Maybe, but I would need a place closer to civilization. A fellow British traveler I met at the lodge mentioned going canoeing as well. 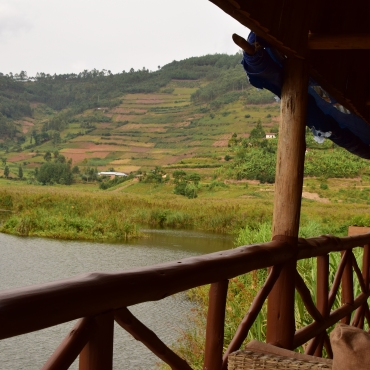 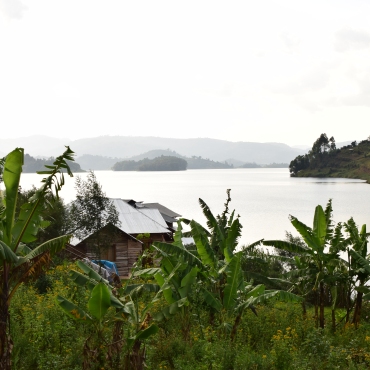 Going back to Kigali was a much more pleasant experience. Mr. Robert had me go with Modern Coast, a Kenyan bus company. For only 15,000 Shillings, I got a “VIP” seat which was actually more than spacious and comfortable – even the regular seats were far better than the sardine can that was Trinity. That meant at the border a much faster stop at immigration on both sides because less people were on the bus. The only problem was being asked to show up at 7am and the bus not stopping in Kabale until around 8:45am. The poor guy manning the Modern Coast was standing out on the road waiting for the bus to make sure it didn’t pass me by. Still, the timing issue apart, if you do this route, go with Modern Coast!!! Once I reached Kigali, it was easy enough to convert my Ugandan Shillings back to Rwandan Francs in one of the many little forex shops and negotiate a reasonable taxi back to my hotel in Nyumarata (only 6,000 RWF). 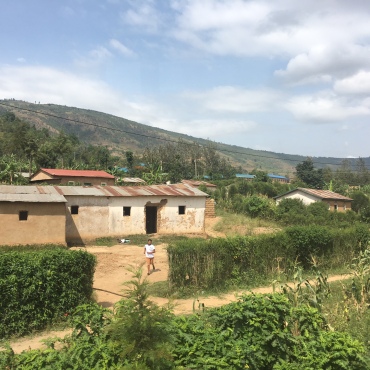 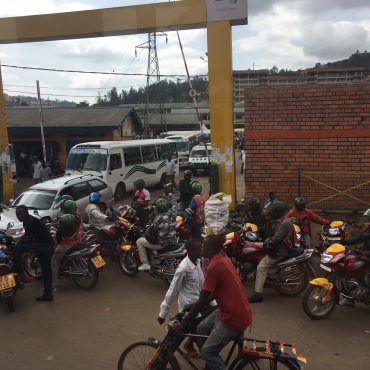