Along with the Iguazu Falls in Brazils, the Victoria Falls which straddle Zimbabwe and Zambia are ranked as some of the most spectacular falls in the world. Prior to Zimbabwe’s political turmoil, the falls were far more visited, but the pace of tourism is picking up again. My consideration were:

The falls are accessible from Victoria Falls Airport and Livingstone Airport. Since I was attaching it to an itinerary on South African Airlines, either place made sense, but two things were the deciding factor:

1) Livingstone is further from the falls than Victoria Falls town, where you can just walk up to them

2) If heading back to South Africa, a visit to Zambia requires showing proof of Yellow Fever Vaccination

And with #2 being considered, I headed to VFA (Victoria Falls) on my South African Airways Itinerary.

The airport at Victoria Falls is under renovation and it badly, badly needs this. There aren’t even a lot of flights going in and out of the airport, but the Visa on Arrival line is painfully slowly. I hate to give mean-spirited advice, but I suggest making sure to get a seat closer to the exit on your flight and just get ahead of everybody else. It was at least an hour+ to get to baggage, even with only our small flight from Jo’burg as the only one disembarking.

Most flights arrive in the afternoon and depart in the afternoon. During that rush, the airport was so extremely beyond capacity when I made my way back to Jo’burg – it is literally a body to body situation. Hopefully when the expansion is done, the experience will be much more pleasant.

While there are taxis, the main companies of Shearwater and Wild Horizons provide shuttle services to the Victoria Falls hotels, so even if you get out of immigration quickly, you may just be waiting for others on your flight.

I worked with Wild Horizons – both companies have a variety of activities scheduled, and one that seems to be a daily hit is crossing the border into Botswana for a day at Chobe National Park. Wild Horizons charged $175USD for this, but probably the unfortunate element was requesting me to wire them the money in advance, which came with a hefty $40USD international wire transfer fee!

The Vic Falls accomodation market is a captive audience with mostly uber-luxury options like the Victoria Falls Hotel and a few select budget options.

That is how I wound up at N1 Motel, a budget accomodation in the main center of Victoria Falls Town. Compared to the luxury lodges which will run you $150-300 a night, N1 cost me around $80USD/night for a double room. The location was fantastic, and while the whole thing feels like a dormitory – cement walls, linoleum floors – it was fine enough for a couple of nights’ stay. You are greeted at check-in with a beautiful portrait of Robert Mugabe and my room even came with a jacuzzi tub, which there was not a chance in hell I was actually getting into! The hotel offers up breakfast for a very reasonable addition, although it isn’t exactly mind-blowing. It definitely seemed like I was the only foreigner in the hotel. 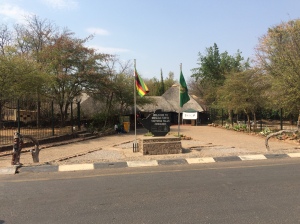 The beauty of the N1 was a straight walk down to the falls in about 10 minutes. Most people are on fully escorted tours, so if you are exploring them on your own, just wait for one of these groups to depart one of the stops and you will have it to yourself. Tip #2 – the credit card machine will of course not be working, and so bring that $30USD fee in cash.

After a pass through the entrance, a short path leads you to the majesty of Victoria Falls. I visited in September, but each season has it’s positives and negatives, with July to September being considered a decent compromise between getting a reasonable water flow and not an obscene amount of mist. Although guides suggest this is peak season for tourists, it really isn’t that bad. You can not compare the crowds to something like Niagara Falls at all. After all, Victoria Falls’ lack of air connectivity and distance from major cities like Lusaka and Harare mean it is hard to access. 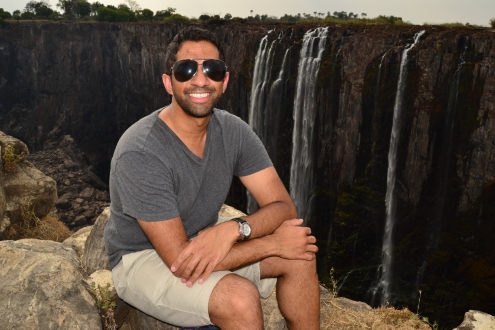 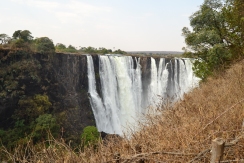 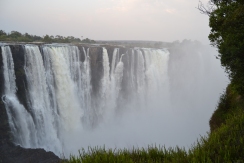 If you are a fast traveler like me, you could probably finish the path around the Zimbabwe side in under an hour, but then you wouldn’t really enjoy the experience of roaring falls, a gentle mist, rainbows, clifftops and the visual of high streams of water pouring over the edge of them.

The path stretches from the Livingstone statue in the north all the way close to the Zambia border in the south, but it is not a very long route at all, but as you can see, every angle offers a different perspective. In some spots towards the south, the water changes into narrower streams, in the middle steady and powerful waterfalls bursting through the clifftops, and at the tops, some panoramic views of everything, and then independent waterfalls.

If you are lucky, you may even encounter a bit of wildlife such as warthogs roaming around the bush that surrounds the falls walkway. I stayed as long as possible until the sun began to set. As the day started to wind down, the viewpoints became emptier and emptier, and finally, the small group of us still left at the Falls started making our way out of the park. There isn’t much else to say about it, but it did appear some high-ranking Zimbabwean official(s) were visiting the falls, as armed military guard blocked off some of the viewpoints as these people made their way around.

The Falls may be incredibly, but if you think of terms like “tourist trap”, “captive audience” or “rip off”, then Victoria Falls would show up in the dictionary next to them.

I love the Falls, but spending more than 3-4 hours visiting them just to see them is a bit of a stretch, even for a real waterfalls enthusiast (if such a thing exists). Besides activities like helicopter rides, sunset cruises and sitting in a pool atop on the pools, one of the most popular trips is crossing the border into Botswana and visiting Chobe National Park. Botswana is reknowned for it’s wildlife, and this is just one way to experience it. Zimbabwe has wildlife reserves as well, but the overall opinion seems to be that it is not quite impressive.

The drive to the Zimbabwe-Botswana border is a quick one, only 30-minutes odd. This is hardly a busy border crossing beyond tourist traffic, so it was relatively painless. Our base was the Chobe Safari Lodge, the closest lodge to the border. We started our boat ride there, were served lunch there and departed on our land safari there. 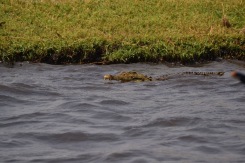 The day trip of Chobe is fairly standard, with a morning on the Chobe River to witness the wildlife gathering at the watering holes, and then a land safari drive in the afternoon. I wasn’t sure what to expect, but the morning boat safari turned out to be an incredible experience. Besides my first time seeing African Buffalo in real life, the variety of beautiful birds, river crocodiles, and hippos added to the beauty. Of course, the usual suspects such as impala, zebra and giraffe were present in abundant numbers. 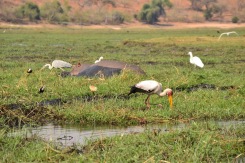 But the most special part of a boat safari on the Chobe River is to observe the elephants. Besides rolling around in the dirt as part of ritual cleansing, the most magnificent ritual is the group crossing into the river. They are just spectacular creatures and I could say everyone on the boat really seemed to relish the experience. 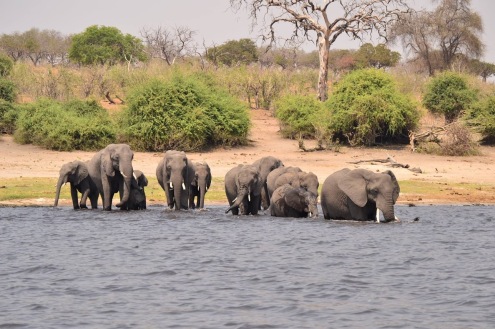 Back at the Chobe Safari Lodge, we were treated to a buffet lunch which was surprisingly very good. After an hour interval, we were loaded onto proper safari jeeps for a short land safari in the dry, dusty heat of the riverbank. Our most interesting find was even before we really got into the park: packs of African Wild Dogs. 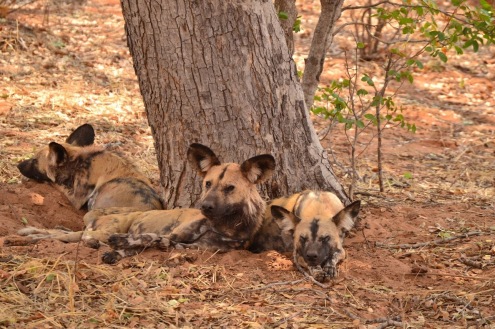 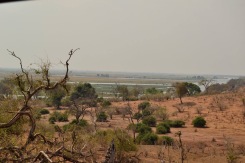 Beyond that, it was a rather uneventful drive focusing on the same animals: impala, zebra, giraffe, elephants and other non-predators. Those of us on the drive were not surprised. It was scorching hot and dry, so most animals were likely to be looking for shade. In hindsight, seeing how incredible the wildlife at Chobe National Park was, I regret not booking an overnight trip into Chobe, staying at the lodge. I can imagine the sunrise and sunset drives or cruises are incredible, but unfortunately for us, were wrapped up and were back in Victoria Falls by late afternoon. To be honest, it was more impressive than visiting the waterfalls!

I think 2-3 days is more than enough time at Victoria Falls. Most of the leisure activities are honestly things you could do somewhere else.