Tourism has developed at very different speeds in the former Eastern bloc. Cities like Prague and Krakow are crushed by mass tourism. The Baltic cities are major cruise ship stops, and even cities like Bucharest and Sofia have become fairly mainstream. Kiev, like Minsk and Chisinau, seems to have defied this trend to stay relatively under-the-radar amidst the political turmoil of the 2014 Euromaidan protests and territorial struggles with Russia.

I spent three days in Kiev. One of those was spent on a full day in the Chernobyl exclusion zone, which I consider a must-do, while this blog post covers my two days in the city of Kiev.

To start with, Kiev should not be rushed! There is so much to do that I rank it right up there with London, Paris, St. Petersburg, and other European cities where rushing would be a major mistake.

Boryspil International Airport is the main airport for Kiev, but also quite outside of the city center. 30 minutes in a taxi would be a dream, but in traffic, an hour is possible. I found getting through the airport surprisingly fast. Even at immigration, I was through in a few minutes with the officer only curious about my colored contacts. The airport has all of the normal facilities needed, from ATMs to stores.

I made my way out from the closer airport just west of the city center, Zhuliany. That could be as little as 10-15 minutes from central Kiev, but obviously has far less flights. I managed to find this curious flight to Tbilisi on some airline called Yanair. Couldn’t find any information on it at all, but it all worked out on the end! 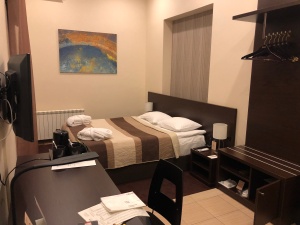 I was told clearly by a couple of Ukrainian friends to try to stay near the Maidan or nearby on the happening Khreshchatyk street. I couldn’t agree more. There are plentiful eating options, stores, nightlife and more in this area vs. other parts of central Kiev, especially if you don’t have friends in the city to show you around. Plus, it’s just practical to explore different parts of the city. 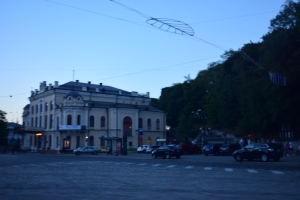 Problem for me – the UEFA game was scheduled right before I showed up, so accomodation rates were jacked up to extremes. I was not game to spend an exorbitant amount of money or stay in some cheaper hotels like Dnipro, which is reviewed consistently as a Soviet Hell. My eyes were on the Senator Maidan Apartments, but it was out of my budget…so, I managed to find a further-away outpost of the Senator chain, Senator City Center Apartments.

The serviced apartments were ok. The language barrier was a bit of a problem, but that’s just part of travel life. There was a metro station across from my apartment (Universytet), but like many of the former Soviet metro systems, it takes 10 minutes to go up or down, so sometimes walking ends up being a better option. Like the 20-minute walk to be near something happening.

During my 48-hour exploration of Kiev, I never really encountered a lot of tourists anywhere. What a different feel to go to the Maidan and just see almost all local people enjoying a night out with live music and some not-to-be-missed musical fountains in the evening!

The Maidan, also known as Independence Square (Майдан Незалежності) just gave me this total vibe of Kiev’s city life. This is a city that is struggling economically after years of turmoil, and this is a free way to enjoy the evening, both for them and for me. Besides, there are some amazing monuments right there, like the Founders of Kiev Monument and the National Music Academy.

I guess we can term the main thoroughfare off of the Maidan as the “Fifth Avenue” of Kiev – this is where you find all your swanky stores, including international brands and swanky Western-style eateries. Frankly, I hate Fifth Avenue when I’m at home and I didn’t care for Khreschatyk Street, either.

My digs in Kiev might have been far from everything, but there were a few interesting things nearby, like the Golden Gate at left (Музей Золоті ворота – A replica of a historic gate) and the National Opera of Ukraine (Національний академічний театр опери та балету України ім. Т. Г. Шевченка) at right. the National Opera has it’s own light fountains, but they are quite, quite tiny. I also missed by the canary yellow St. Volodymyr’s Cathedral (Володимирський кафедральний собор) but I don’t exactly consider it a must-do on the Kiev church circuit. There are so many beautiful Orthodox-style churches in this city and I LOVE Orthodox-style churches. 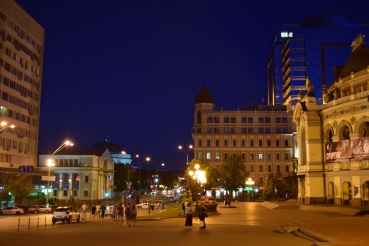 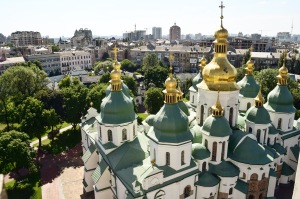 Heading north from the Southern Circuit, in less than 10 minutes you will show up at one of the gems of Kiev, St. Sophia’s Cathedral (Софійський собор). With the olive green and gilded domes, this is a stunning church to take  a visit through with various exhibits, but for me, the highlight was climbing up the 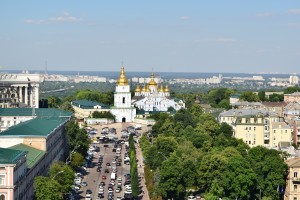 Bell Tower for some beautiful views (See right), not just of the cathedral itself, but also the nearby neighborhood.

The long walk to Podil

If you aren’t keen on walking, you could just continue straight up to St. Michael’s, but I found some cool sites in and around the historic Podil (Поділ) neighborhood that I needed to see.

I wanted to find this public art space known as Park Landscape Alley (Пейзажна Алея). Well, not all travel stories are happy endings. I walked and walked and walked and the Google location where I would supposedly enter the park was just an abandoned lot on a very non-descript small, hilly road. In fact, the area around Podil is VERY hilly. I just wandered and wandered trying to find this special public art space, and all I found was this small park to the left. It had some interesting sculpture pieces, but having absolutely no sign of the art space, I gave up and moved on north to Podil proper.

At the southern edge of Podil is Zhitnii Market (Житній ринок). I am a huge fan of markets so I had to go see it for myself. It is one giant space which is only partially being used – and almost all of the products were food: fresh meat, fruit, vegetables, and everything from spices to honey. I clearly saw the no photography signs around, so I climbed up to the third floor and got some discreet photos.

Besides historic architecture, Podil has some cool murals too!

St. Andrew’s Church (Андріївська церкваt) is just one highlight on the steep road from Podil to Volodymyrska Hill. The inside, which is supposed to be beautiful, was sadly closed for renovation, so the only thing they were letting visitors do is take in the views from the terrace. 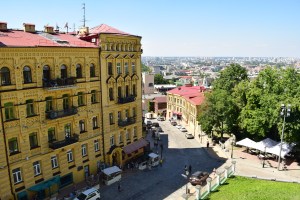 The winding downhill path from St. Andrew’s includes some cute cafes and art vendors, honestly probably the maximum of “touristy” I found anywhere in this city center. There is so much more to see, but I was on a mission to get to St. Michael’s Golden-Domed Church and more of the city.

St. Michael’s Golden-Domed Monastery (Михайлівський золотоверхий монастир) is yet another must-see church in Kiev, sort of a trifecta completed with St. Sophia’s and Pechersk Lavra. The complex is  small compared to the other two, but the clean details of the design are amazing and merit a full 360 walk.

Not just the exterior, the trifecta of Kiev churches are filled with ornate devotion decoration – gilded everywhere and candles lit everywhere. 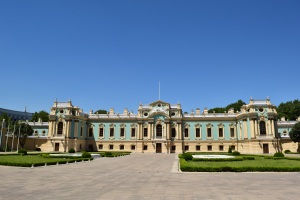 Heading straight east from St. Michael’s downhill leads you back to Maidan, but straight back up a hill heading to Mariyinsky Palace (Маріїнський палац). Along the way, you will pass by the Water Museum, but to be honest, it looked and read to be nothing more than an educational activity for kids. The palace itself is gated off and brings you shades of the Hermitage in Saint Petersburg, but it is really just a border for the park with the same name – where folks were hanging out with their kids, school groups taking a visit, and more going on. Get some fresh air in the green space and move along.

If you didn’t take the Kiev metro to Arsenalna, this is where you you land at a more formal green space, Park of Eternal Glory (Парк Вічної Слави). You could take the street path to Kiev Pecharsk Lavra, but the park has some very interesting monuments, including one dedicated to victims of different Ukrainian famines. 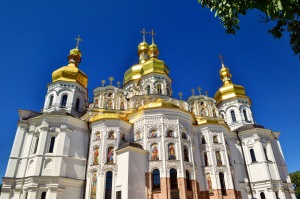 Kiev Pechersk Lavra (иєво-Печерська лавра) would be my pick for the crowning glory of Kiev. The complex is massive, and unfortunately, mostly marked only in Ukrainian, so I just sort of wandered, one of a handful of independent tourists mixed in with worshippers and small religious tour groups.

When you enter the complex, you have a bizarre number of options for your ticket. Kiev is extremely cheap, so I just opted for every single thing.

I admired the beauty of the main church with it’s frescos and gilded domes, and inside, just endless beautiful gold work mixed with religious paintings.

Orthodox mass was going on so I just say quietly in a corner to be respectful until it was over, and discreetly took a few pictures afterward with my phone. Remember, Kiev is not touristy, so people are likely to get some strange looks when they pull out a real camera.

I was super confused about where to go in this complex. There are a couple of maps floating around, but I have no sense of direction either. I wanted to see the caves, because that is what the church is known for.

I came upon the entrance to the caves purely by dumb luck, assuming somewhere downhill led to it. When the woman manning the entrance told me I had to buy a candle, I assumed it was a rite of passage. Nope…the cave path is dark and mostly unlit, so the candle is required to make your way through and not bump into any entombed saints.

In the caves, I squeezed past another ongoing mass to wander the narrow dark paths. This may be a bit of a startling experience, especially if you are claustrophobic, but very cool indeed and worthwhile.

I am a lazy bum, and while my friends insisted I visit The Motherland Monument (Батьківщина-Мати), so I just caught the views from the bridge and the church. Plus, according to my friend’s husband, it was a hassle to get the guide to take him to the arm of the statue until my friend, a Ukrainian, convinced him to do it with a little bribe. Me not having a Ukrainian friend or spouse to help me with that, it seemed like a dicey prospect. Maybe next time!

I wanted to try some traditional Ukrainian Food. Besides Chicken Kiev, I tried a couple of other dishes at the slightly touristy but still worthwhile Korchma Taras Bulba. At least they were fast, which when you are dining solo, becomes a godsend to avoid awkwardness. Check out these delicious assorted dumplings (known as varenyky in Ukraine) served with sour cream and fried onions. 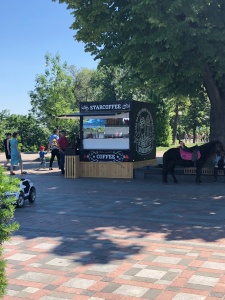 Speaking of which, my apartment didn’t exactly come with breakfast. Thankfully, Kiev is dotted with these little coffee stands which will make you a fresh whatever – cappuccino, latte, etc. on the spot.

I had a great time in Kiev, even though the language barrier was a bit of a problem, a finding concurred by other travelers. But for that downside, it is just a bit an undiscovered treat and I can’t wait to explore more of it!